“You know what Sal?”

“I think I know what you’re going to say.”

“At least we can take comfort, that in our passing, a whole lot of humans are really sick today because they ate too much.”

“That’s not what you thought I was going to say?”

“No, I thought you were going to say these wings are just as useless as our normal ones.”

I’ll bet that President Obama is thankful that people will be with their families, eating, arguing and watching football and will give his website a break and leave the criticism alone for a day.

I”ll bet all these girls that twerk and tweet pics of themselves with nothing on will be thankful to let their gut out.

I’l bet the whole rest of the animal kingdom is thankful that they’re not turkeys.

I’ll bet kids are thankful because this is one time their parents are good with them playing video games and not paying attention or going outside.

I’ll bet the Kardsahians are collectively thankful for their butts.

And now what I’m thankful for this year. I’m thankful for my folks, not just for the incredible financial support they’ve given me but the encouragement and support of my new careers. My mom loves the Water Cooler blogs, my dad likes the more thoughtful ones and it’s nice to share the humor and thoughtfulness that goes into each one. One could say that it’s genetic but I think it goes beyond that, I know a lot of people that don’t really get along with their parents and vice versa, and I think it’s a great gift.

I’m also very thankful for my mind. I was reminded recently of the achievements of both hemispheres this year; my left brain has absorbed computer software and languages in less than a year-quite an accomplishment, and I’ve heard from numerous people asking “how do you think of something new to write every day” and that’s all you righty.

And it’s only just begun.

Weekly random thoughts. Since I’m self-employed it’s my version of water cooler talk: no one to talk to so it goes out to cyberspace.

I’ll bet man’s first word was “Ow,” cause, you know, there were a lot more rocks everywhere back then.

Do people that use search engines besides Google also use it as a verb, like “I’m yahooing for baby spider’s names?”

I wonder if the turkeys of the world have their affairs in order?

I wonder if turkeys are doing last minute “toning” exercises so those parts of the body are picked?

I wonder how many mother-in law/daughter relationships, hopeful new marriages and shaky old ones are decided by lumpy mashed potatoes tomorrow?

I’m a vegetarian, which makes me an expert, canned cranberry jelly is the better of the two.

Change is in the air…and I need a helmet because quarters really hurt.

I wonder if The Boogie Woogie Bugle Boy of Company B ever got out of the army and started a band on his own?

Why don’t the Dallas Cowboys arm-wrestle the Cleveland Indians on Thanksgiving? That seems like it might be more traditional. 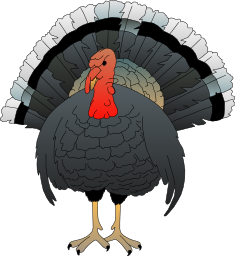 “This Thursday, millions of my brethren will have sacrificed their life. For what? An America that is already plenty fattened up will become fatter.

I do not speak to you today to make you feel guilty, no, I come here in the spirit of the holiday. It is not for me to judge whether eating us is a good thing, although I’ve got some really ugly friends and I don’t see the allure, but you all look pretty funny to me as well. I’ll stick to my corn. They’re cute.

But I do want respect for my kind!  It is time that you humans, the civilized, revere the role we play! With the development of capitalism and material pursuits the race to Black Friday and shopping has eclipsed the importance of sitting down and cherish the meal and the time spent with family. And we do look beautiful when we come out of the oven!! Even I cannot deny how much better we look with a tan.

Again, I am not here to tell you that eating us is bad or good. I am thankful that you’ll listen. Bob-cats eat us and have you ever tried talking to a group of bob-cats? But I do invite you to re-examine the entire tradition. Was it really a celebration when the Pilgrims and the Indians got together like you might have learned in school? If anything, the Indians sat at the kid’s table. And how many of you learned they were called Indians when in fact, people called them that because they thought they were in India?*

So, you know, maybe you re-think the whole thing next year. I hear Tofurkey, you can’t taste the difference. Cluck Out!”

*This blog was inspired by whom I consider the best comedian working today, Louis CK. This is the clip.