An Open letter to Hulu

Oh hulu, in the beginning you so lived up to your name—you were different, you were vibrant, you were fun to be with. But I guess the allure of money made you cheapen your wares like a plastic lei.

I’ve never been able to understand. Maybe one of your execs will chance upon this blog and help enlighten me. I understood the change in the beginning when more commercials started to air. I knew that initial, I think it was only like 15 seconds each break, couldn’t last. It was just too good to be true. But I didn’t blame you. The writers struck to get more money so you had to get more ads. It was never more than a normal television show so I didn’t mind.

But then you started to take episodes off quickly. They could only be watched for a short period of time. Unless you wanted to subscribe to hulu plus. Oh for shame. You didn’t want to just keep your niche little market, you had to try and compete with Netflix and Amazon. Wasn’t it enough that you were getting advertisers, wasn’t that enough for you? 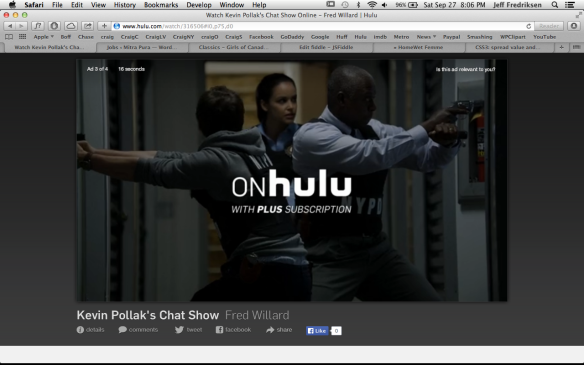 And lately you’ve really gone and done it. You started running ads like the one above where the fact that you had to subscribe to hulu plus to see that show was getting to be in smaller print. You were hiding it. Were you being deceitful, or were you ashamed?

Because we miss you hulu, those of us that are financially challenged right now miss you. We need your free programming to keep our spirits up. Please don’t let us down, please don’t slowly fade into subscription land and ignore all who visited you when you were alone on an island. We need you. 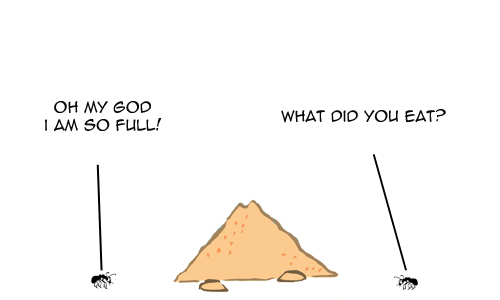 “My goodness what’s with the face Bill?”

“I finally understand what people in California were going on about, there’s no break. It’s always bright here. You can’t be in a bad mood.”

“Well what reason would you have to be in a bad mood?”

“Because it’s always bright, how can I be so happy, I’m used to the rain, the clouds.”

“I’m not supposed to say this, but if there’s anyone that should be relieved it’s always light it’s Noah. so find him and you’ll find someone to bond with.’

(for those that miss Pluto)

I was waiting for the bus the other day when a sign across the street caught my eye. Dave’s World Famous Burgers & Dogs. I’d never heard of it, but maybe the rest of the world has? I’m a vegetarian but know a  lot of meat eaters and I’ve heard tell of great burgers from other lands, but not this one. And I’ve lived in Long Beach for 4 years and no one’s ever mentioned it. So what makes it world famous?

As it turns out, it’s supposed to have a pretty great burger according to overwhelming reviews on Yelp. Even if I was somehow in the mood for a burger I would probably not make a good judge. But still the concept of “world famous” was stuck in my mind.

Now it turns out this place has been here for fifty years so there is a different advertising mind set from that time. That’s when the clients and the ad guys used to go get drunk for lunch if Mad Men is too believed, so I’m sure they eventually just started laughing at anything and before he knew it, 7 martinis later Dave thinks World Famous is the perfect choice and he writes a check.

Now I don’t fault Dave, sober or not. Why not put that on a sign? Who’s gonna argue but me? What’s more fascinating to me is that this is not just an old-school method, we still fall for it. I recently saw a commercial for Super Cuts where this band talks about how they go get their hair cut there, because they can “relate to their lifestyle” or something just as ridiculous. So some kid who can only play one song is probably going to buy into the idea that if he goes to Super Cuts he’ll become a rock star.

Thousands of kids wanted to “be like Mike” and bought everything Michael Jordan endorsed. When I was a kid they sold Space Food Sticks so you could eat what the astronauts ate and PF Flyers that would make you “run faster and jump higher.” It’s all about the superlatives. We want the best, brightest, and most important in our life, I guess, with the hope that we’ll become world famous.

We all seem to want to feel special and the people that are clothing us and feeding us know that we want only the best, whether it’s a thousand dollar suit or a four dollar cup of coffee. I for one, feel sorry for the guy that named his hot dog Best in the Land. How can he compete with something that’s World Famous?