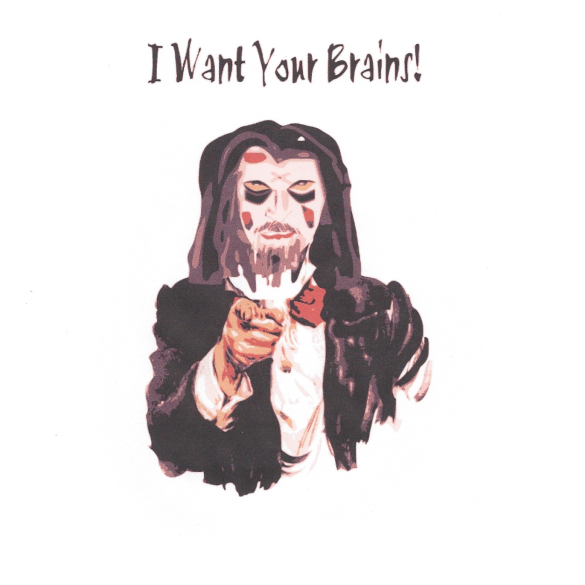 Are Zombies sucking our brains out through a straw while we sleep?

Because we seem to be missing some basics lately like common sense, spatial awareness and basic logic.  Let me give you some examples.

Yesterday I went to a convenience store to purchase a slice of pizza from their deli counter. Now this is not about the time they cook it, that’s an entire subject in itself. Any establishment that has a sign on their window saying “your pizza will be ready in 3 minutes” really doesn’t qualify as an eatery. This is after a “convenience” store and it’s all about speed and maybe some people like that mushy dough taste. Being half-Italian, I know that I can pre-heat my oven before I walk over and bring the slice back to crisp it up. They’re only a $1, so I go with it. But it was the actual service that gave me pause. I was the only one in the store when I walked in. The cashier got my slices and by the time she walked to the register two women had walked in and were waiting to pay for gas. She held up the box for me and said “they’re right here” and then proceeded to ask “who’s next?”

But no, she took the women who were standing there first. Now granted the one that was standing there had a lot of plastic surgery and so the cashier might have been afraid. Maybe she knows that her brains are being sucked out. Maybe she’s a Zombie fighter who is just still working on her martial arts training and can’t strike yet.

The second instance also involves food. At my local grocery store the deli counter had a special on grilled cheese paninis with chips and a drink for $5, and the sign looked very inviting. I had been jonesing for a grilled cheese, was hungry, and this was going to be great. Now like the cashier at the convenience store, the woman serving me was very pleasant and seemed to be very conscientious, buttering the bread and carefully layering the 3 cheeses.

But when I got home there were three thin brown marks and the rest of the bread was basically un-toasted. She’d been Zombized.

The last example I’ve brought up before, the spending that took place prior to the Presidential election and the inauguration. If these officials and corporate sponsors had not had parts of their brains sucked out by Zombies then they would recognize how much impact that money could have had on education and fighting obesity in our children. But they’re just not aware that the Zombies are fattening them up because they’re eventually going to eat all of them. After all the kid’s brains don’t have a lot going for them with all the cuts in the public school system. Plus the Zombies need the energy for all their late night raids with their straws.

Zombies have become really popular around Halloween and more. When I was a kid it was just the basic black and white movies of Dracula, Frankenstein and the Wolfman. But today there’s Zombies. And maybe they’re real. After all you can’t blame the minimum wage worker or the politician. They’re all well-meaning and efficient.

It must be the Zombies.