While visiting my parents a couple of weeks ago my dad made a great comment about a news item. One candidate or another was speaking on class warfare and my dad said how could they comment when they didn’t really have any class. I apologize to him if I didn’t quote him properly, but this really isn’t about politics, because he followed it up with the most important part: his mom didn’t have the money or power (in their own heads) of these men but had more class then they’ll ever be able to buy. And right he is. 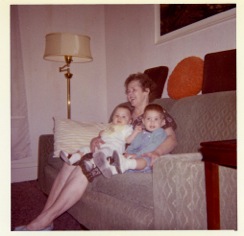 This five foot nothing Norwegian used to ride seven hours to a cabin in Wisconsin with two boys in the back seat of a Volkswagen. They complained, she didn’t.

She power walked all around Chicago before power walking was a thing, the same two boys unable to keep up even though loaded with M & M’s. She rode the bus to her destinations and took us on adventures with it.

She moved from house to house to visit her kids and grandkids, sleeping wherever was convenient for them, and I swear the only luggage she ever had was her knitting bag.

Although the guest, she got up and made Swedish pancakes, but don’t tell any Norwegian. She also made fantastic cranberry nut bread and great chocolate chip cookies.

The woman could nap in the blink of any eye, sitting up. Now that’s a talent.

Those are the memories I have of Grandma Mabel. I didn’t know the years before where she raised three children on her own, going to work every day, on that same bus, and I’m sure never complaining once. I imagine the kids did enough it on their own, that’s what kids do. She didn’t complain about the government not taking care of her, she just did what she needed to do. And those kids turned out to be amazing parents and aunts and uncles.

I’m a snacker. But not just any snack. I loves my chips. I don’t keep them around the house because if I open the bag, it’s gone. People that have just a handful and then close them up with one of those over-sized bulldog clips are crazy people. First of all, hello, you open them and they lose their freshness no matter how tightly you seal the bag. It’s a fact, the same kind of fact as “your car loses value the minute you drive it off the lot.” So accept it. Second, how in the world can you have, like, half a dozen chips? That doesn’t curb anything. That’s like giving a dog one biscuit and then wondering why he’s staring at you. It’s not enough. And third, and most important, they’re friends. They’ve been living in the bag, all snuggled up and really got to know each other. They don’t want to be separated. Some of them are even just plain nostalgic for the good old days when people “lived together, died together.” Either way, they want  to be eaten all at once.

The thing that saves me from being 5’7″ by 5’7″ is that they don’t make my favorite snack anymore and haven’t since I was in my 20s: Plain Doritos. You can now get Cool Ranch, Blazin’ Buffalo & Ranch, Fiery Habanero, Nacho Cheese, Natural White Nacho Cheese, Poppin’ Jalapeño, Ranchero, Salsa Verde, Smokin’ Cheddar BBQ, Spicy Nacho, Toasted Corn, Zesty Taco, Cheeseburger (X-13D), Sizzlin’ Picante, Spicy Sweet Chili, Hot Wings & Blue Cheese. Do you know what they all have in common? You get s%$t all over your fingers!

What happened to the plain? They had such a great taste or maybe it was a simpler time. It might have stemmed from my love of plain ole Fritos that had started as a child. My grandmother used to make the most awesome sandwich (pronounced samwitch): peanut butter and jelly on white bread, cut into diagonals, separated a touch so that a river of Fritos corn chips (along both angles!) could run through it. OMG, that was magical! She also had a never-ending bowl of M & M’s available, so who wanted to go back home? Plus she bought us a toy each time we stayed there.  I also had a “Frito Bandito” eraser that fit on the top of your pencil when I was a kid, but that got deemed politically incorrect and so the Bandito was deported (Oh-that’s so politically incorrect too!)

Fritos come in many flavors as well, not quite as many as the Doritos, but I was super disappointed two nights ago at 1:00am when I was slaving over a website design and 7-11 couldn’t satisfy my jones. But there is still a snacking nirvana I enter at times: Fritos scoops are awesome, and if you break a pretzel rod into a small piece, place it in the crevice and dip it into Dean’s French onion dip, your mouth will be ecstatic. Luckily I only make that my dinner once every couple of months, so I stay thin. But attention Frito Lay company: if you have any plain Doritos laying around, they’re probably still good, and I bet all those little guys would like to live out their purpose, in my stomach.